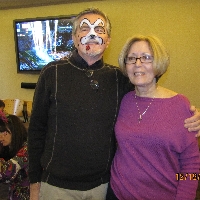 A personal campaign by Michael Dugan

Joseph V. Dugan, 80, of 17 Meadow Way, Candlewood Knolls, New Fairfield, CT passed away peacefully whilst holding the hand of his beloved wife Pat on Monday, April 5, 2021 at Danbury Hospital. He was the husband of Patricia (Nolan) Dugan.

Joe was born in Yonkers, NY, son of the late Eugene and Sarah (Kelly) Dugan. He attended school in Yonkers, NY. In September 1971, Joe and his wife Patricia moved to New Fairfield, CT after falling in love with both Candlewood Knolls and Candlewood Lake.

Joe served honorably in the U.S. Navy from 1959 to 1962 aboard the USS Tutuila. After serving our country for three years, Joe was discharged from the U.S. Navy and joined the Yonkers Fire Department. While he started as a Fireman, Joe was promoted to Lieutenant, then to Captain and Commanding Officer of the Yonkers Arson Investigation Unit. Joe postponed his retirement after the tragic events of September 11th, 2001. At the time of his retirement later in 2002, Joe had served the people of Yonkers for over three decades with his courage, heroism, and a witty sense of humor. He saved countless lives and provided the kindness and compassion that only he could to those who had lost everything. In 1995, Joe received the “Emergency Medical Man of the Year Award” from the City of Yonkers for actions that showed his limitless courage and bravery for delivering a baby in the front seat of a parked vehicle. In addition, Joe received many awards and accommodations during his lengthy career.

Joe and his wife Pat owned and operated the Candlewood Stained Glass Studio located in Candlewood Corners, New Fairfield. Joe was an extraordinary artist and focused his God-given talent on creating some of the most beautiful stained glass pieces utilizing the Tiffany method. He specialized in large panels, kitchen cabinet inserts, sidelights, and various commissioned works of art. His reputation was such that he was asked to provide stained glass pieces for St. Patrick’s Cathedral in midtown Manhattan.

Joe was predeceased by his brothers Eugene, Robert, Thomas, John, Lawrence and Raymond.

In addition to his wife of 53 years, he is survived by his son Michael, his daughter-in-law Mandy, and his three grandchildren, Maggie, Joey, and Emma. We are all heartbroken, and will miss his sense of humor, his intelligence, and his good looks.

Over the past two decades, the face of kidney disease has been rapidly evolving. Landmark developments in nephrology have created new approaches to treatment, and groundbreaking information regarding prevention has altered the world’s understanding of the disease. NKF is leading the way in fighting this disease, leveraging their knowledge and experience to focus on building awareness, increasing prevention, and improving treatment of kidney disease.

Your donation will honor my father’s battle with kidney disease and spread hope for the future. It will also help raise vital awareness to people at risk for kidney disease, so they do not have to go through what my friend has gone through.

Every donation is meaningful to me, to my father’s memory, and to my entire family. I would be grateful for your support to help fight kidney disease.