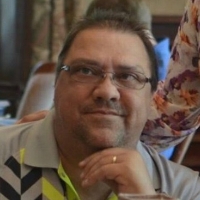 A personal campaign by Taylor DeOliveira

My father was diagnosed with Alport Syndrome when he was 25 years old. After close to 3 years on dialysis, he received a kidney transplant from his mother in 1995. A remarkable 17 years later he found himself back to square one. However, this second round of treatment seemed to take a greater toll on his body. Complications such as decrease in vision, loss of hearing, and heart problems soon began to follow. He suffered 3 heart attacks, 3 strokes, and a brain aneurysm as a result of a-fib, high blood pressure, and calcification of his heart valves - all due to his kidney disease. He later developed esophageal cancer and as the internal bleeding progressed, his body could no longer withstand the dialysis which led to his eventual passing.

This may seem like a horrible life to endure but anyone that knew Tony would have never been able to tell. My father led a life full of laughter, love and classic rock. His only wish was to contribute to a world where others spent more time at the beach than in a hospital. Your donation will honor my father's battle with kidney disease and spread hope for the future. It will also help raise vital awareness to people at risk for kidney disease, so they do not have to go through what Tony has gone through.

Every donation is meaningful to me and my family. I would be grateful for your support to help fight kidney disease.